Hakkapeliittas on the rally courses

Speed, extreme situations and demanding conditions These are the challenges that traditional rally racing has offered tyre manufacturers from the beginning of last century. Motorsport has played a significant role in the story of the Finnish winter tyre. The latest innovations have been tested in international rallies, and the success of the Hakkapeliitta has increased awareness of this champion of extreme conditions.

The legendary Monte Carlo Rally, established in 1911, started as a gentlemen's race but became a professional event in the 1960s; Finnish drivers also achieved acclaim at this event. At best, fifteen teams from the land of the Hakkapeliitta took part in the event. At the Monte Carlo in 1963, Pauli Toivonen used studded Haka-Hakkapeliittas on the mountain sections. Rumours of these northern tyres with extreme grip started spreading.

The success of the Finnish drivers at Monte Carlo started at the same time with the breakthrough of studded tyres. In 1963, Pauli Toivonen and Anssi Järvi placed second, while Rauno Aaltonen and Tony Abronen took third place. The world of rallying would come to know “The Flying Finns”.

Their flight continued in the mountain rallies. The first Finnish winner of the Monte Carlo was Timo Mäkinen, with Paul Easter as his co-driver, in 1965. Pauli Toivonen and Ensio Mikander won in 1966. The following year, Rauno Aaltonen drove to victory with Henry Liddon. During the coming decades, the tradition of the Flying Finns was upheld by multiple rally World Champions Juha Kankkunen and Tommi Mäkinen.

Success in European rallies caused a major rally boom in Finland, with multiple rallies being established. Jyväskylän Suurajot – later on known as Rally Finland – started in 1951, and the first Hankiralli was run in 1955. In 1963, Turun Moottorikerho launched the first Hakkapeliitta Rally that started Hannu Mikkola’s successful career. 1966 saw the start of the Arctic rally Tunturiralli, currently called Arctic Lapland Rally, which attracts international stars with the northern snow and ice. Kari O. Sohlberg is remembered as the winner of the first Tunturiralli.

The Hakkapeliittas also did well in the European Police Rally in the 1970s. In 1974 and 1975, the radial tyre NR21 and Kometa studs were used in Liège, Belgium.

The Hakkapeliitta Special rally tyre was produced in the 1970s. The tyre, designed for extreme conditions, also helped R&D in the product development of consumer tyres.

The new world record for the fastest car on ice was achieved by Nokian Tyres, the inventor of the winter tyre, in March 2013. Test driver Janne Laitinen achieved a speed of 335.713 kilometres per hour (208.602 mph) on the ice of the Gulf of Bothnia in freezing winter weather. Grip and speed like never before were ensured by the spearhead product for the world’s leading manufacturer of winter tyres – the Nokian Hakkapeliitta 8 studded tyre (255/35R20 97 T XL). 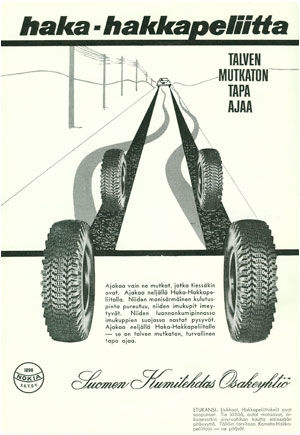 “In Stockholm, I equipped my car with Haka-Hakkapeliittas, to which I partially owe my success in the Monte Carlo Rally. The Haka-Hakkapeliitta has now made its breakthrough as a rally tyre in Central and Southern Europe, as my competitors studied my tyres very closely both last year and especially this year, giving them continuous praise. For my part, I can heartily recommend the Haka-Hakkapeliittas for use in rallying. In normal driving, they have already been proved superior.” 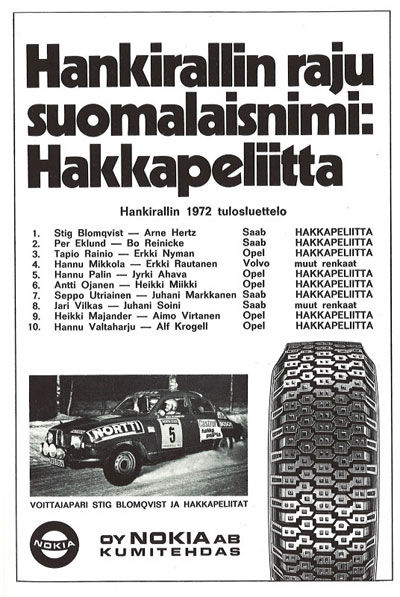 “The Finnish favourite for Hankiralli: Hakkapeliitta”. Results from the Hankiralli in 1972 show that eight of the top ten cars were equipped with Hakkapeliitta tyres. 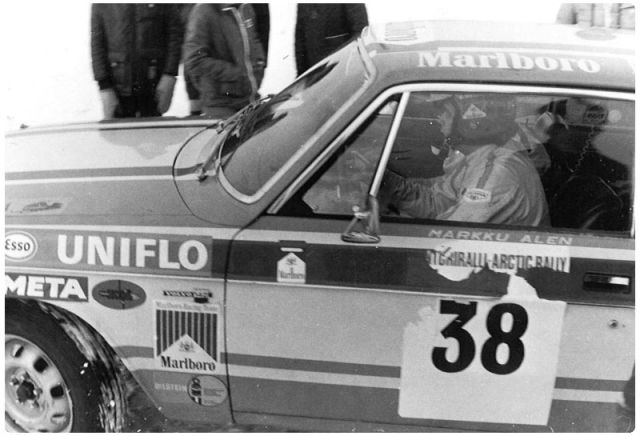 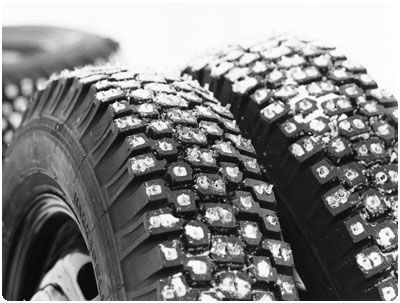 The Hakkapeliitta Special was a special type of tyre developed by Oy Nokia Ab’s rubber industry for rally drivers. The standard tyre Hakkapeliitta NR 06 used a bias-ply structure suited for gravel roads, but came with the familiar tread pattern. The Kometa studs were sharper than standard, and the rubber compound was harder. The tyre entered the market in 1971 and was sold in limited quantities. The advertisement promised that the Hakkapeliitta Special achieves shorter stopping distance on ice than a summer tyre on wet asphalt!