The story of the Hakkapeliitta tyre begins with the Kelirengas. The story contains challenges and innovation as well as feeling and technology. The multiple test winner Nokian Hakkapeliitta 8 continues the legendary tyre series, taking the best Hakkapeliitta traditions into a new era.

The world's first winter tyre, and the predecessor of the Hakkapeliitta, was the Kelirengas (the “weather tyre”) introduced by Suomen Gummitehdas Osakeyhtiö in 1934. Its special tread pattern provided safety for snowy, unpredictable winter roads. The first Kelirengas tyres were designed for trucks, but the selection of sizes soon increased.

In 1936, the Hakkapeliitta, also known as the Lumi-Hakkapeliitta (Snow Hakkapeliitta) was introduced. This tyre was designed for passenger cars and it had a sparse transverse tread pattern and gripping edges.

The grooves penetrated even thick snow, eliminating the need for cumbersome snow chains. The entire concept of the tyre was based on a good grip surface. The snow road champion was born.

Trucks received their own Hakkapeliittas in 1940. The selection of heavy tyres increased rapidly as the Y-Hakkapeliitta, U-Hakkapeliitta, Jyry and other models were introduced. The suction cup like tread pattern of the winter tyres remained similar until the 1950s.

Winter driving conditions changed, and the Hakkapeliitta changed with them. Roads were already covered by ploughing services in the 1950s, and the road surface in the winter was thus often hard and slippery. The Haka-Hakkapeliitta from 1956 had twice the amount of load-bearing tread compared to its predecessor, which increased its grip on hard surfaces.

The invention of the stud, or metallic skid stopper, was a significant leap ahead in the development of winter tyres.  The hard alloy studs designed for the Hakkapeliitta tyre entered the market in 1957, and in 1961 Hakkapeliittas were available with pre-made stud holes. The first winter tyre that was specially designed for studding was the Kometa-Hakkapeliitta in 1961.

The new introduction for 1965 was simply called the Hakkapeliitta. All Hakkapeliittas were now available with stud holes. The tread pattern of the Hakkapeliitta had been modernised by combining the rubber cups with bridges. The many edges of the rubber surface provided grip on snow, while studs excelled on ice.

The mild winters and increased de-icing with salt created demand for an urban winter tyre. The tread pattern and rubber compound of the SF-Hakkapeliitta from 1969 were also designed to suit roads with no ice, and it became particularly popular among taxi drivers.

The Hakkapeliitta wears a belt

The radial tyre became a silent, durable performer. International development caused a change in the tyre carcass material. The first steel-belted winter tyre was the Hakkapeliitta NR 08 in 1977. Its tread pattern had more sections to achieve better wet grip. For lorries, there was already a tubeless alternative, the NR 17 with the familiar Hakkapeliitta tread pattern.

Successful Hakkapeliitta NR 09 and its companions

Changing winter conditions and new types of cars challenged the Hakkapeliitta to take the next leap forward. Even more dry road properties were required, and lower-profile tyres affected the car's handling. Development work for a new generation of winter tyre started in 1978.

The anticipated Hakkapeliitta NR 09 was introduced in test markets in Sweden and Norway the next year, and in 1980 the new tyre was available to everyone. The NR 09 became a success for several consecutive seasons, convincing both consumers and industry magazines. The new Hakkapeliitta also had a new tread, and the traditional suction cup pattern was retired. The new tread had an arrow shape, and the staggered sawtooth patterns effectively carried slush away from between the tyre and the road.

The Hakkapeliitta NR 09 was joined by the Hakkapeliitta M+S 111 in 1984. The tyres were extensively marketed together. The M+S 111 was profiled as a tyre for the ice-free main roads and city traffic, and the NR 09 succeeded with its traditional snow and ice properties. The Hakkapeliitta 10 was introduced in 1989, and it adapted the successful tyre especially to the features of new cars.

Grip with or without studs

The Nokian Hakkapeliitta 2, the new introduction for 2000, combined the properties of studded and non-studded winter tyres. The combination of new stud technology and an efficient friction rubber compound created unique grip.

In the autumn of 2002, a special winter tyre for Central Europe was introduced: the Nokian WR intended for high-speed driving under varying winter conditions. The new introduction was the fastest winter tyre in the world.

The Nokian Hakkapeliitta 4 from 2003 was equipped with new stud technology. The patented square stud innovation and the Eco Stud System offered even better grip on ice, while reducing wear on the road surface. The rubber compound included an eco-friendly natural product, canola oil, to maximise grip.

The Nokian Hakkapeliitta Truck E for trucks and buses saw the light of day in 2008. This special tyre for rough roads had a precisely shaped traction surface and wear resistance that could handle extreme conditions. In 2014, the anniversary of the Kelirengas, the series was completed by the Nokian Hakkapeliitta Truck E for demanding main road use.  The benefits of this truck and bus tyre include, for example, the patented dual block pattern in the traction surface and the Winter Safety Indicator for heavy winter tyres that indicates when the tyre’s winter grip properties are at their best. 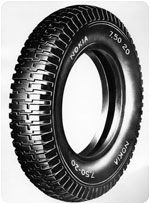 The world's first winter tyre was the Kelirengas, the predecessor to the Hakkapeliitta. It was developed to be used on trucks in the Northern conditions and poorly ploughed winter roads of the 1930s. The grooved tread pattern of the tyre worked on snowy roads, making snow chains obsolete. The strong but spacious transverse grooves cleaned off snow while driving, which ensured excellent grip. The winter tyre tread pattern that was introduced with the Kelirengas remained similar in the Hakkapeliittas all the way to the 1950s. 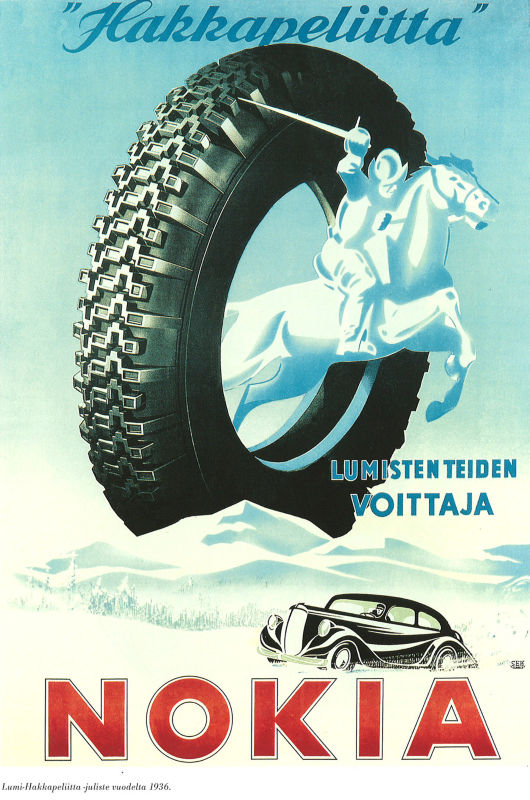